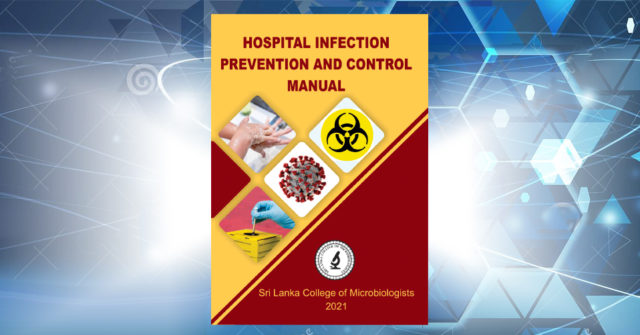 The Sri Lanka College of Microbiologists proudly announce the launch of the New edition of the Hospital Infection Control Manual on 27 th Feb 2021 that coincided with the ceremony held to mark the induction of the President 2021 and Siri Wickremesinghe Oration.
The Sri Lanka College of Microbiologists (SLCM) first published the hospital infection control manual in 2005. An updated edition, incorporating the evidence that has emerged during the last decade, was an urgent need. This revised edition of the manual was developed following an extensive review of the available literature and evidence in infection prevention and control along with adaptation of the recommendations to the local setup after extensive consultation with relevant professional Colleges.
The President and the Council of SLCM remain grateful to the past Presidents who initiated and continued the work of this manual throughout their tenures, the members of the editorial board who took leadership in this project, the general membership for their contribution as authors and reviewers of the chapters and the members of other Colleges who contributed their perspectives to improve its relevance to the local context.

Prices for the IC manual:

Copies can be purchased at the College office during the working hours.