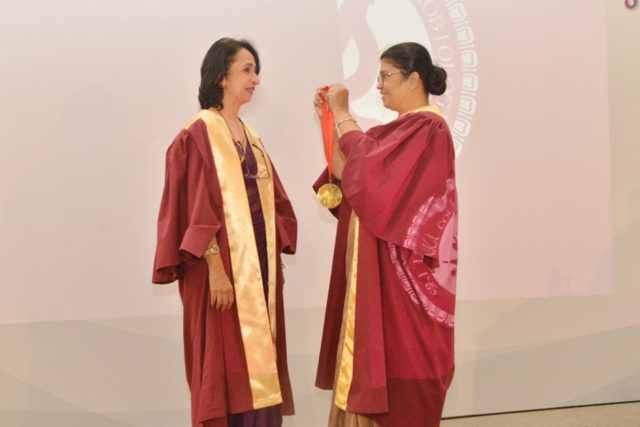 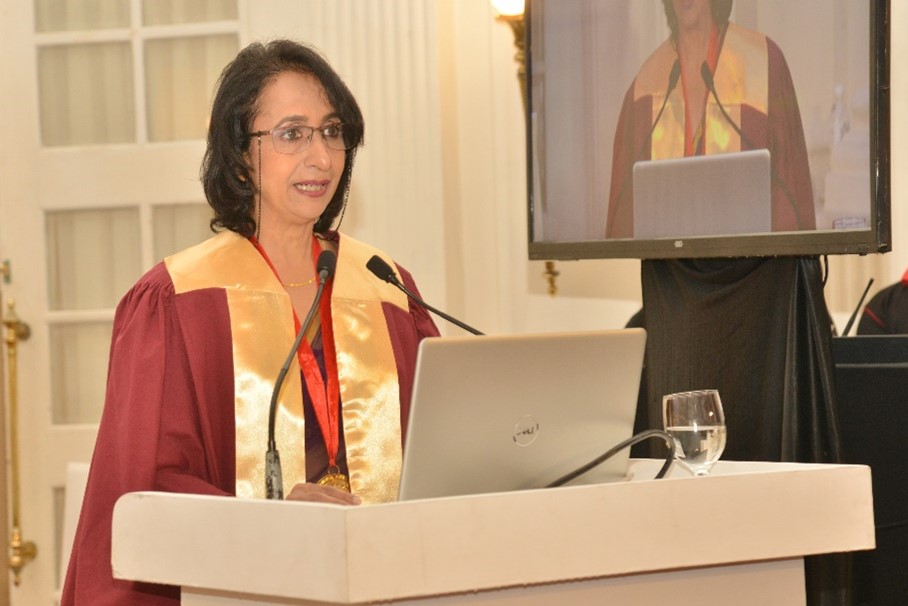 Professor Nadira Karunaweera was inducted as the President of Sri Lanka College of Microbiologists on the 27th of February 2021 at the “The Grand Ballroom”, Galle Face Hotel Colombo.

Dr. Shirani Chandrasiri the outgoing president of the SLCM introduced Professor Nadira Karunaweera to the gathering.

Professor Nadira Dharshani Karunaweera is the Chair and Senior Professor of Parasitology at the Faculty of Medicine, University of Colombo and has held this position since 2004. She has also been an honorary Visiting Fellow at the School of Public Health, Harvard University, USA, since 2006. She is a Medical Parasitologist by training and has extensive teaching and research experience in tropical diseases, with special emphasis on vector-borne infections. She is an elected Fellow of the National Academy of Sciences of Sri Lanka and an elected honorary member of the American Academy of Arts and Sciences. She is also an elected Distinguished International Fellow of the American Society of Tropical Medicine and Hygiene. She is a member of the Policy Board of the Inter-Academy Partnership which is a body that brings together networks of academies of science, medicine and engineering across the globe. Since 2010 she has been a Board member of the Governance Council of Genomic Epidemiology of Malaria Project of the University of Oxford, United Kingdom and has also served as a Consultant and advisor to the Strategic Research Steering Committee on Pathogenesis and Functional Genomics of the World Health Organization for more than 10 years.

She has been a recipient of several competitive research grant awards, both international and local. Internationally recognized awards for her scientific accomplishments include several Tropical Medicine Centre Awards from the National Institute of Allergy and Infectious Diseases, National Institute of Health, USA; the Global Challenge Award for malaria from the University of Oxford, UK and the Research Development Award in Tropical Medicine from the Wellcome Trust, UK.

Fellowship awards she has received include the Senior Research Scholar Award, from the Radcliffe Institute for Advanced Study, Harvard University, U.S.A; the Fulbright Advanced Research and Lecturing Award, U.S.A.; the Fellowship Award, Commission of the European Communities, Belgium and Fellowship award, T.D.R., from the World Health Organization, Geneva, Switzerland. Local awards bestowed on her include Annual Presidential Awards for excellence in research which were awarded on successive years from 2000 onwards and the National Apex Award for Professional Excellence and Zonta Woman of the Year Award. She spearheaded the establishment of the Sri Lanka National Chapter of Organization for Women in Science for the Developing World (OWSD) and is the Founder President of that organization.

She is considered an authority in malaria research that encompasses wide ranging fields including pathogenesis, epidemiology, immunity and genetic diversity and has been instrumental in generating novel information, which aided the process of policy making related to the control and elimination of this disease from Sri Lanka. She continues to function as a team leader in multidisciplinary research studies in human parasitic infections and is responsible for pioneering work in the field of leishmaniasis, a newly established disease in Sri Lanka, with setting up of a leishmaniasis diagnostic, training and research laboratory in the country. The studies led by her and the findings of her team continue to influence national health policy regarding this disease. She was instrumental in the recognition of leishmaniasis as a public health problem in Sri Lanka, in its inclusion as a ‘notifiable disease’ in the health sector, in the recognition of new treatment options for leishmaniasis leading to improved efficacy and patient safety and in the recognition of insecticide resistance in sand flies as a challenge for the control program.

She has provided academic and research supervision and guidance to a large number of undergraduate and post-graduate students that include MPhil and PhD-level scientists and has been in the University system for over 30 years, at the University of Colombo, Sri Lanka, the University of Edinburgh, UK and Harvard University, USA. She has extensive academic, research and administrative experience. As an expert in tropical diseases, she continues to serve on many national and international scientific review boards, consultative committees and editorial boards sharing her expertise in an honorary capacity. She has organized national and international conferences, workshops and capacity building programs and led the team that established the first-ever ‘Research Promotion and Facilitation Centre’ at the Faculty of Medicine, University of Colombo in 2013 that continues to provide training and promotes capacity building of young local scientists.

She has published widely with a Google Scholar h-index of 32; i-10 index of 69 and has authored over 100 peer-reviewed journal articles with over 3500 citations. She also has a large number of abstracts of presentations, several book chapters and shares the ownership of 2 patents.

Ladies and Gentlemen, as you may realise, I have only stated the salient points of Professor Nadira Karunaweera’s outstanding career and achievements. I am fully confident that the Sri Lanka College of Microbiologists is in very safe hands for next coming year and I very sincerely wish Professor Karunaweera and her Council every success in all the activities lined up for the year ahead.