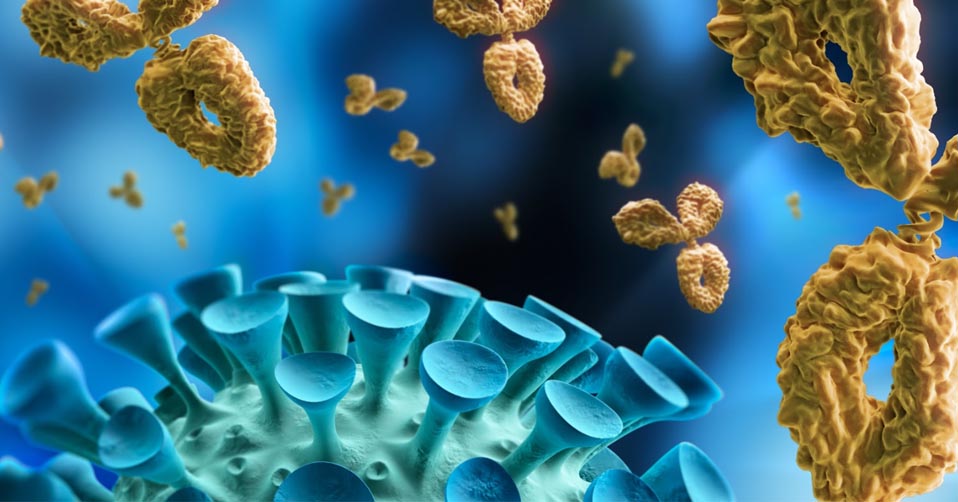 Coronaviruses are recognised as important pathogens in humans as well as animals. They are widespread among birds and mammals with bats being the host to the largest number of genotypes. Coronaviruses belong to the order Nidovirales and has 4 distinct genera, alpha, beta, gamma and delta1. The viruses associated with human disease fall into alpha and beta genera. Gamma and delta genera contains avian coronaviruses.

Seven coronaviruses have been recognised to cause human disease. Of these, HCoV-229E and HCoV-NL63 belong to the alpha genus, while HCoV-HKU1, HCoV-OC43, MERS-CoV, SARS-CoV1, SARS-CoV2 belong to the beta genera1.

HCoV-OC43, HCoV-NE63, HCoV-HKU1, and HCoV-229E are known as common cold coronaviruses1,2. They are considered to be responsible for up to one third of community acquired upper respiratory tract infections in adults during epidemics. These viruses are also thought to play a role in severe respiratory infections in both children and adults. Certain common cold coronaviruses may cause diarrhoea in infants and children.

At the end of 2019, a novel coronavirus was identified as the cause of a cluster of cases of pneumonia in Wuhan city in Hubei Province of China3. This rapidly spread throughout China and the rest of the world. The causative coronavirus was identified and named as SARS-CoV2 and the resulting illness was termed COVID-19. It has 79% genetic similarity to SARS-CoV12. At present, there are more than 10 million confirmed cases with cases reported from all the continents except Antarctica4. The reported number of deaths at present exceeds 500,000 with a varying case fatality rate being reported from different countries.

The SARS-CoV 2 genome, has several open reading frames (ORF). ORF 1a/b, near the 5’ end, about 2/3 of the genome length, encodes 16 non structural proteins (nsp), whereas four structural proteins are encoded near the 3’ end. These include the spike (S),envelope (E), membrane (M) and nucleo-capsid (N) proteins2,5. In between are regions which code for several proteins responsible for maintenance and replication of the virus.

Transmission and clinical features of SARS-CoV-2

It is transmitted primarily by respiratory droplets. Faeco- oral transmission is also thought to be possible. The median incubation period is approximately 4–5 days2,5. Around 97.5% of symptomatic patients develop symptoms within 11.5 days2. Most patients exhibit a fever and dry cough. Some experience difficulty in breathing, muscle and/or joint pain, headache/dizziness, diarrhoea, nausea and haemoptysis. Severe cases progress to acute respiratory distress syndrome (ARDS) around 8–9 days2,5.

Pathophysiology of SARS-CoV2 closely resembles that of SARS-CoV infection2. Aggressive inflammatory response lead to airway damage. Therefore, disease severity in patients is due to a combination of viral infection as well as the host response. Acute respiratory distress syndrome (ARDS) that is responsible for death in 70% of fatal cases of COVID-19 is characterized by difficulty in breathing and low blood oxygen level2. Some patients develop secondary bacterial and fungal infections. Release of cytokines occur as a result of viral infection and/or secondary infections. Uncontrolled release of cytokines or cytokine storm can also lead to multi organ failure and death. Recent studies indicated that increased cytokine levels (e.g. IL-6, IL-10, and TNFα) and lymphopenia (significantly reduced CD4+ and CD8+ T cells) correlate with disease severity of COVID-192,6 (Figure 2). In addition to reduced T cell counts, the surviving T cells appear dysfunctional. 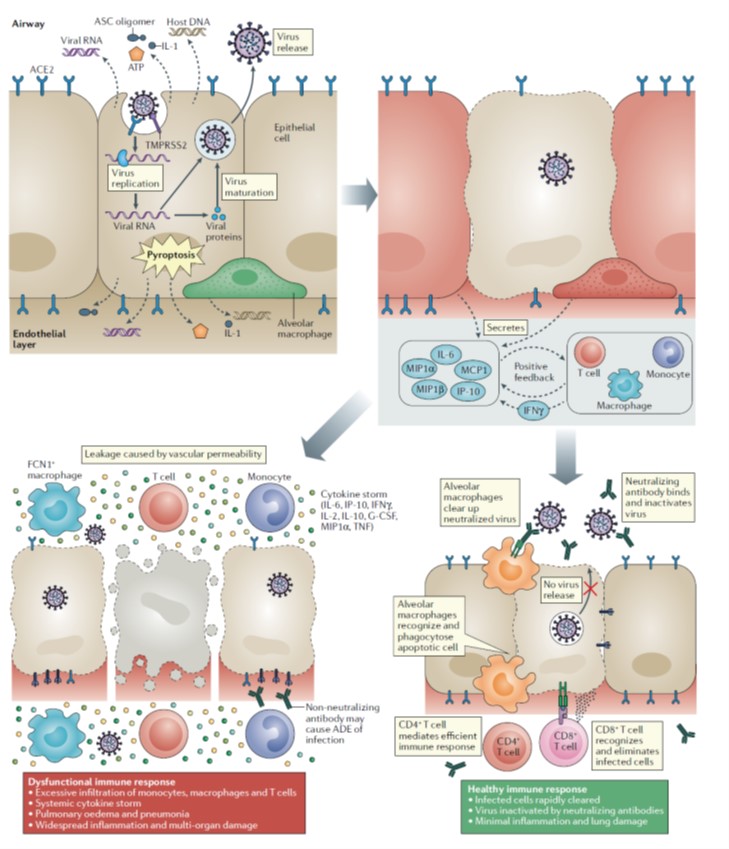 Infection with SARS-CoV2 leads to destruction of lung cells that triggers a local immune response, recruiting macrophages and monocytes to the site leading to release of cytokines and priming of adaptive T and B cell responses. Although this resolves the infection in most, a dysfunctional immune response may occur, that can lead to severe lung injury and systemic pathology in some2,6.

Innate immune response to SARS-CoV2 is thought to be similar to that for other coronaviruses due to the shared sequence homology and the conserved mechanisms of innate immune signalling. Response to most RNA viruses are initiated by the engagement of pattern recognition receptors (PRRs) including Toll-like receptors (TLRs) and RIG-I-like receptors (RLRs) that recognize the RNA viral genome and its replication intermediates. It is suggested that upon entry into the alveolar epithelium, the virus is sensed by the endosomal single-stranded RNA sensor, TLR7/8, and the cytosolic double-stranded RNA sensor, RIG-I/MDA-5. Following recognition, adaptor proteins such as MyD88 and MAVS are recruited to induce downstream signalling. Outcome of this is activation of transcription factors, IRF3/7 and NF-κB, which leads to the production of type I interferons (IFN-α and IFN-β) as well as other proinflammatory cytokines such as IL-6 and TNF-α2,6.

Coronaviruses may also activate the inflammasome sensor, NLRP3, leading to secretion of the cytokine IL-1β which is a highly inflammatory cytokine. Activation of NLRP3 inflammasome also leads to pyroptosis or an inflammatory form of cell death2. There is evidence that SARS-CoV induce the formation of the NLRP3 inflammasome through the action of viral proteins E and 3a.However, the exact mechanisms of viral recognition in SARS-CoV2 is still under investigation.

Type 1 IFN response is essential to limit propagation of the virus within the host during the early phases of the illness. In addition to the direct antiviral effects, type I IFNs can also modulate the innate and adaptive immune responses. Receptors for type 1 IFN are expressed on many cells including macrophages. Binding to these lead to activation of the JAK/STAT signalling pathway that in turn leads to the formation of STAT1/2/IRF9 complex and induction of IFN-stimulated genes (ISGs), such as the anti-viral enzyme RNAse L and the pro-inflammatory chemokine CXCL102.

SARS-CoV and MERS-CoV hide viral intermediate products such as dsRNA within double-membrane vesicles during the replication process and it is likely that SARS-CoV2 employ the same mechanism for avoidance7.

Certain viral proteins may actively inhibit host sensing or downstream signalling molecules in order to prevent the initiation of IFN expression. MERS-CoV membrane (M) and nsp4a are known to suppress RIG‐I induced activation of IRF3 and MDA-5 activation. In addition, the viral protease, PLpro, has been shown to have deubiquitinase (DUB) activity in the infected cell, as well as inhibitory activity against IRF3 activation in both SARS-CoV and MERS-CoV.

Viruses can block the IFN signalling cascade directly. SARS-CoV nsp1 and nsp6 have been shown to block the phosphorylation of STAT1 and the translocation of the STAT1/2/IRF9 complex preventing activation of an antiviral state within the infected cell and the enhancement of the IFN response.

Both T and B lymphocytes against SARS CoV2 had been detected in the blood stream after 1 week of onset of symptoms. Much of the adaptive response has been described in relation to SARS-CoV infection.

CD4+ T cells express IFNγ, TNF and IL-2 suggesting that patients with SARS-CoV infection uses TH1 responses to mitigate the infection2. This may also contribute to the immunopathogenesis. Depletion of CD4+ T cells in mice has demonstrated slower clearance of the virus from the host as well as severe lung inflammation. Interestingly, immunization of mice with dendritic cells bearing SARS-CoV peptides has led to higher numbers of virus- specific CD4+ and CD8+ T cells in lungs and increased survival. However, more studies on the T cell response are needed to determine the optimal T cell engagement strategies for the development of a vaccine.

B cell responses following SARS-CoV2 infection begins during the first week of infection along with the T follicular helper cell response2. In SARS-CoV infection, antibodies develop against the nucleocapsid (N) protein initially. Antibodies to S protein are found within 4–8 days after symptom onset. Neutralizing antibody response is thought to occur around the second week and majority of patients show neutralising antibody by the third week. This is most likely to be towards the S protein. However, the viral titres peak earlier in SARS-CoV2 than SARS CoV. Therefore, antibody responses may also arise earlier in SARS-CoV2. Convalescent plasma have been used therapeutically with good clinical results in COVID-19 patients. However, the duration of protection from antibodies and whether the patients are susceptible to reinfection is largely unknown. In addition, specific titre and specificity of the antibody repertoire required for protection remain undefined.

Conversely, previous studies done in animal models for SARS-CoV have indicated that neutralizing antibodies to S protein can potentially augment severe lung injury by exacerbating inflammatory responses. A correlation between development of acute respiratory distress syndrome and antiviral IgG seroconversion has been observed in 80% of patients with ARDS2. Patients who developed neutralizing antibodies to S protein earlier in infection had a higher rate of disease than patients who developed these antibodies later. Similar observations have been made for MERS, where patients with severe disease appear to have higher antibody titres than those with mild disease. This is thought to be due to the pro-inflammatory response following activation of Fc receptors on alveolar macrophages upon binding of antibody-virus immune complexes.  Complement activation may also contribute to this. Similar phenomena may occur in SARS-CoV2. Hence, it should be taken into consideration during development of therapeutic monoclonal antibodies for treatment of these patients.

Compounds that can block the receptor for SARS CoV2, ACE receptor and TMPRSS that is a serine protease required for viral entry into cells, are considered potential therapeutic options. There are trials underway for agents such as JAK inhibitors which are likely to have these properties.

Another strategy would be to deliver high concentrations of a soluble ACE2 that could potentially reduce virus entry into target host cells. A trial with recombinant soluble ACE2 is underway. Monoclonal antibodies targeting S protein may also inhibit virus entry or fusion and are also considered potential therapeutic option. However, none of these have been approved for clinical use at present.