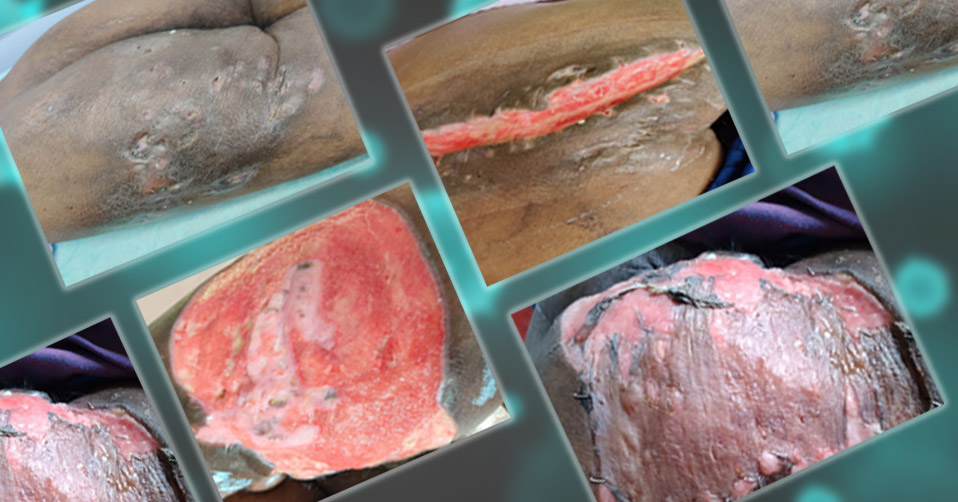 Botryomycosis is a chronic suppurative infection that manifests clinically as plaques that are often ulcerated and have discharging sinuses. Therefore, they closely mimic mycetoma. It is most commonly caused by Staphylococcus aureus but it could be polymicrobial. It can present as a cutaneous or a visceral disease. The cutaneous form can invade deep tissue. Here, we describe a patient who presented to us with cutaneous botryomycosis of the buttock. As far as we know this is the first reported case of botryomycosis in Sri Lanka.

A 57 year old immunocompetent male patient without any comorbidities referred to us from the dermatology clinic with a 12 year history of having multiple discharging sinuses on the buttock to take samples for microbiological diagnosis. He denied of any trauma to buttock. On examination there were many discharging sinuses on the left buttock with pus. Right side of the buttock was not involved. Pus samples were taken and the patient was admitted into the surgical ward. On admission, he was afebrile and had unremarkable clinical parameters. His FBC was 10.5 103/ul with neutrophils of 77%. Hb was 12.7g/dl and platelets were normal. Renal and liver profiles were normal. ESR was 55mm. CRP was not available in the hospital.

From the first pus culture, Staphylococcus aureus and Group D streptococcus was isolated. Although the patient was not ill, pus was coming from multiple sinuses involving the whole left buttock, patient was started on empirical oral cotrimoxazole and oral linezolid to cover actinomycetoma and MRSA as the patient has been exposed to many antibiotics over the years. The same organisms were also grown in the first tissue sample sent from the theater after debridement. S. aureus was resistant only to ciprofloxacin and erythromicin but sensitive to cotrimoxazole and linezolid. Group D streptococcus was only R to clindamycin. During the first 2 weeks of hospitalization all samples of pus, swabs and tissues grew only S aureus and streptococcus and same antibiotics were continued. Fungal cultures sent were negative. Linezolid was stopped after completion of 2 weeks. Histology report showed no evidence of granulomata actinomycosis or malignancy.

During the 3rd week of hospitalization with multiple debridements, pus cultures grew E coli and Klebsiella spp. Both E coli and Klebsiella were resistant to cotrimoxazole, ciprofloxacin and ampicillin. Then oral coamoxyclav was started and cotrimoxazole was stopped. Even with many debridements there were sinuses with pus. From 4th week onwards Proteus ssp also grew in addition to Klebsiella and Ecoli from pus and tissue samples with the same resistance. Oral coamoxyclav was continued for 4 weeks. Some samples of swabs and tissue grew coagulase negative staphylococcus spp (CNS) and microbiological point of view those were not considered as pathogens. No evidence of deep tissue invasion. X ray was normal. TB was also excluded by doing culture. Skin grafting was done by the surgical team during the 9th week of hospitalization as the skin loss was significant. Patient was in the hospital for 10 weeks and the microbiology department received 20 samples mainly pus and few tissue and swabs and those were good in quality. First 4 samples grew S aureus and Grp D Streptococcus. 12 pus samples grew either Ecoli. Klebsiella and Proteus with similar sensitivity. Therefore in this case pathogens were polymicrobial.

Dermatology team’s clinical suspicion was mycetoma on admission. However microbiology and histopathology departments failed to provide any evidence for mycetoma. Then the dermatologist confirmed the diagnosis as botryomycosis with positive cultures.

Diagnosing botryomycosis includes clinical suspicion and microbiological cultures. Isolation of the causative agent and susceptibility tests are essential to provide appropriate treatment. The treatment consists of debridement with prolonged course of antibiotics. Usually, treatment is continued till complete clinical resolution.

His hospital stay was unremarkable other than dropping of Hb probably due to serial debridement. Patient was discharged on cotrimoxazole by the dermatology team with a plan to do skin grafting to the remaining area.

Botryomycosis was first described in a horse in 1870 by a German pathologist. Botryomycosis is a rare presentation of common pathogens and needs to be considered while evaluating a chronic invasive subcutaneous infection. Botryomycosis is caused by a chronic inflammatory reaction to bacterial pathogens. Cutaneous botryomycosis is a more common form and can present with non-healing ulcers, sinuses and fistulae, as was seen in our patient. The differential diagnosis of botryomycosis includes Actinomycosis, Eumycetoma, Mycobacterium tuberculosis and non-tubercular mycobacteria. Rarely, Kaposi sarcoma can also present in a similar manner. Visceral form of disease or drug-resistant pathogens may need parenteral therapy. 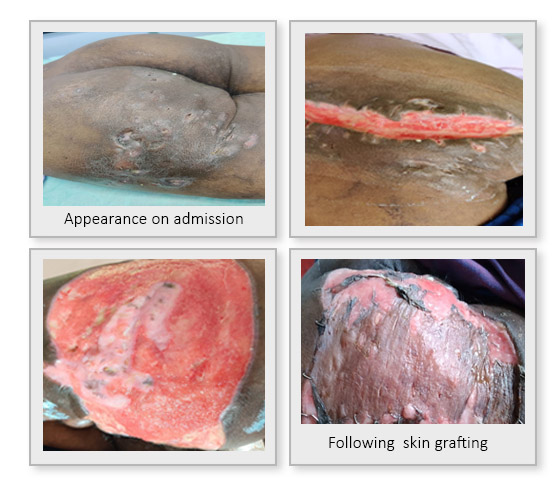