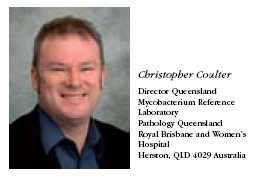 He is an expert on the clinical and laboratory aspects of mycobacterial diseases, including tuberculosis, and is now the Director of the Queensland Mycobacterium Reference Laboratory at the Royal Brisbane and Women’s Hospital in Australia, a post he has held since 1999. This lab is also a WHO Collaborating Centre for Tuberculosis Bacteriology and a Supranational TB Reference Laboratory. Dr Coulter is also the Medical Advisor on Tuberculosis at the Centre for Healthcare Related Infection Surveillance and Prevention and Tuberculosis Control in the Communicable Diseases Unit of the Chief Health Officer Branch, and the Director, Microbiology of the Infection Management Service in the Prince Charles Laboratory Group and Pathology Queensland at the Prince Charles Hospital, Brisbane.

He has been involved in many collaborative research initiatives in the field of Microbiology, and has over 40 scientific publications in international journals including the Medical Journal of Australia, Microbiology Australia, Emerging Infectious Diseases, Thorax, Journal of Clinical Microbiology and even the Lancet. He has also made innumerable poster presentations, and delivered many invited lectures at medical conferences in Australia and Asia 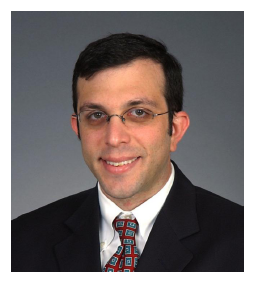 Dr Ben Pinsky is an Assistant Professor of Pathology and an Assistant Professor of Medicine at the Stanford University School of Medicine in Stanford, California. He is also the Medical Director of the Clinical Virology Laboratory of the Stanford University Medical Centre and the Medical Director, Point of Care Testing, in the Surgery Centre at the Byers Eye Institute in the same Center, as well as Co-Director of the Global Health Diagnostics Fellowship Programme in the Stanford Department of Pathology.

Dr Pinsky has been the recipient of a large number of research grants on range of virology-related projects. He has 38 peer-reviewed research articles in journals such as Journal of Clinical Microbiology, American Journal of Surgical Pathology, PLoS Neglected Tropical Diseases, and Emerging Infectious Diseases. He has also co-authored 8 book chapters.