Strengthening infection prevention and control in hospitals and community is an essential component in combating antimicrobial resistance (AMR). This has been stressed by the World Health Organization by recognizing “Reduce the incidence of infection through effective sanitation, hygiene and preventive measures” as the third strategic objective in the global action plan for combating AMR.

It was a long felt need to have MO/IPC to function in a team with the consultant microbiologist and ICN in order to further strengthening of implementation of infection prevention and control activities in the hospitals. Though there is a handful of infection control medical officers appointed by the ministry of Health, Nutrition and Indigenous Medicine are functioning in hospitals at present they are without any special training on the subject.

The Sri Lanka College of Microbiologists (SLCM) recognized this gap and prioritized the task of initiating training for medical officers to work as MO/IPC. Developing a training programme with a proper curriculum and identified objectives was assigned to two of us by the council of the SLCM. Considering timely need of this worthy task two of us developed the programme with curriculum for two week training for MO/IPC and it was circulated among the other microbiologists too for their valuable input. Following the due consideration is given to the suggestion made by them, final programme together with the curriculum was prepared and handed over to the Director General of Health Services ( DGHS) at a Task Force in Microbiology  meeting held in 2015. Subsequent to the approval by the DGHS, several discussions were held at the subsequent task force meetings about organizing the training programme and also provision of human resources with the Director Training at the Ministry of Health.

At last it was decided to arrange the training programme through the Education, Training and Research ( ET & R) unit at the Ministry of Health with the resource provision by the SLCM. Administrative aspects were looked in to by the ET & R unit of the Ministry of Health. The ET & R unit collaborated with the SLCM for resource allocation. Two of us with the guidance by the President SLCM and the joint Secretaries managed to allocate resource persons within a shorter period of time in spite of busy schedules during the preparation for the annual scientific sessions of SLCM. Human resources were allocated  from both microbiologists and other specialties considering there relevance to infection prevention and control such as epidemiology, health education, research and critical evaluation of journal articles which are of importance in practicing IPC in healthcare.

The first MO/IPC training programme for medical officers was inaugurated on the 22nd August 2016 with the participation of Director Training from the Ministry of Health, Deputy Director/ ET & R and postgraduate medical officers in the unit as well as the President of the SLCM and consultant microbiologists at the auditorium of Directorate of Quality & Safety in the premises of Castle Street Hospital for Women. Following traditional lighting of the oil lamp, Dr. Vindya Kumarapeli,  Director Training, Ministry of Health and Dr. Kanthi Nanayakkara, President SLCM addressed the audience emphasizing the importance of the training programme as well as the way it was put forward by the SLCM and the task force in microbiology.

Pre test was held following the inauguration. There were 49 participant medical officers on the first day but only 38 managed to successfully complete the programme due to problems related to accommodation especially those who came from the distant hospitals. First two days training was held at the same auditorium and the rest of the days at the Aldo Castellani Auditorium, MRI. In addition to the knowledge component in the form of lectures, practical exposures to the participants on infection prevention & control too was done by paying visits to close by hospitals namely the National Hospital of Sri Lanka, Infectious Diseases Hospital and Castle Street Hospital for Women during the two weeks period.. The visits were meant for the observation of existing practices and comparison of practices with standards available locally and internationally. Following completion of twelve days training programme, post test was held. Evaluation of the training programme was done using two evaluation forms prepared by the ET and R unit of the  ministry of health.

In addition to the consultant microbiologists from SLCM and consultants from other specialties, officers from the ET and R unit had to take a great effort in order to make this event a success. We make this opportunity to thank all of them and expect their fullest cooperation and support to make this an annual event which was highlighted by the Director Training and President SLCM at the inauguration as well as at the closing ceremony.

On 6th September 2016 prior to the closing ceremony four presentations were done by the participants in different groups. The presentations were planned  in a form of critical evaluation of the existing practices with the standards available globally and locally. It was an interactive session helping the participants to express their views about the infection control practices.

Following evaluation of the pre test and the post test a tremendous improvement in the knowledge on IPC has been observed and the SLCM can be proud of this great achievement.

It is extremely necessary to make arrangements to have further discussions with the ministry of health at the task force in microbiology in order to rectify the issues encountered at this first training programme with the view of improving the future programmes to minimize shortcomings. 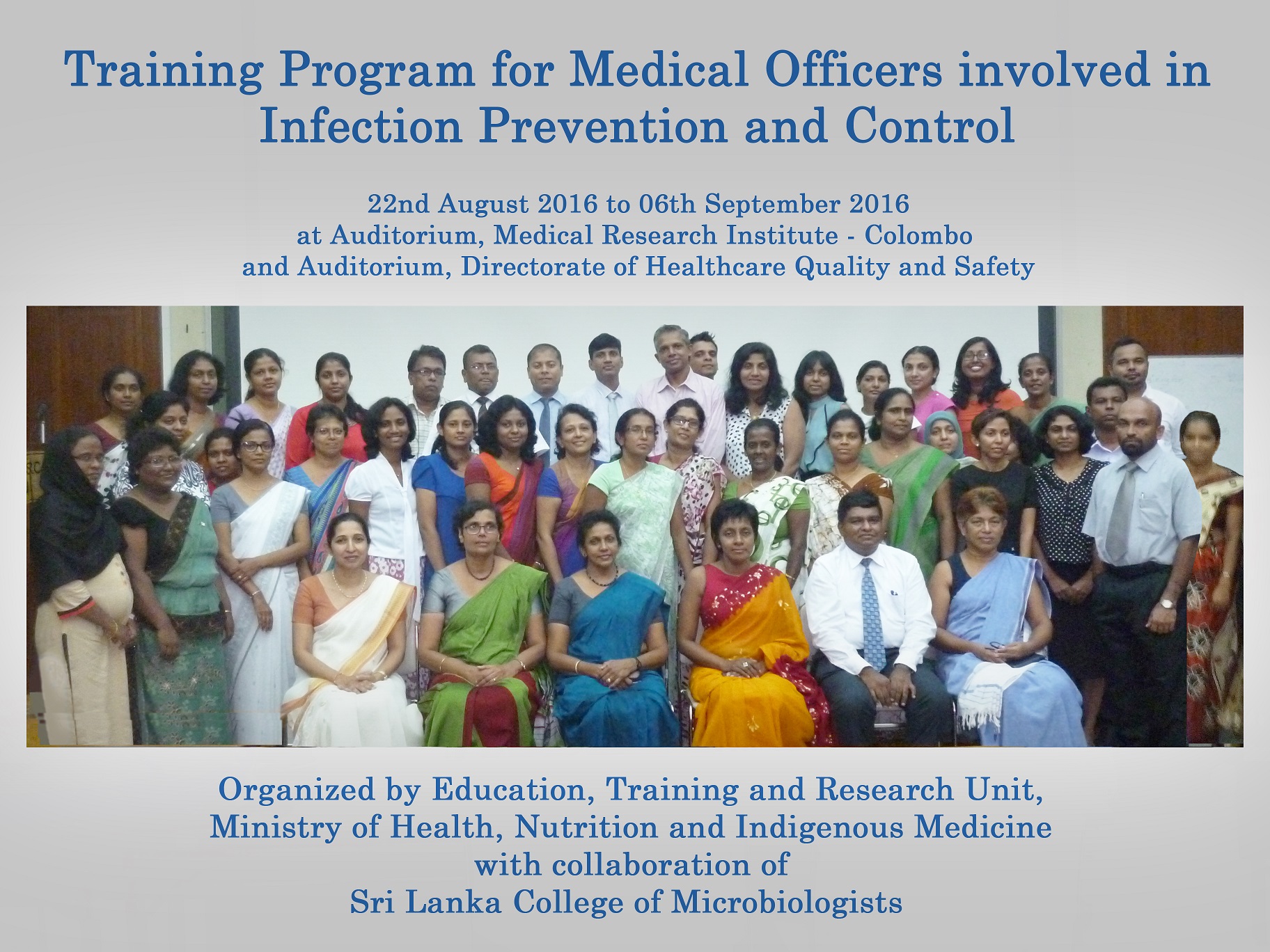