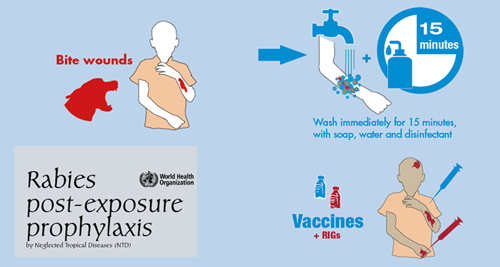 Rabies is a viral infection caused by a lyssa virus. It is a zoonotic disease which is prevalent among mammals. Rabies is endemic in Sri Lanka and the main carrier identified in transmitting the disease to humans is the dog followed by cats and other wild animals.
Transmission is usually through infected saliva via a bite of an infected animal, saliva contaminated scratches or a lick on broken skin or mucous membranes. The virus targets nervous tissue and will enter the peripheral nerves and travels up along the spinal cord to the brain stem and the brain, causing an invariably fatal encephalo-myelitis.

The incubation period of rabies depends on the size of the inoculum as well as the distance from the viral entry to the central nervous system. It may be as short as few days or as long as few years, but is usually around 1 – 3 months.

PET consists of: (i) thorough washing and flushing of the wound; (ii) a series of rabies vaccine administrations started immediately after an exposure, and if indicated (iii) Rabies Immunoglobulin (RIG) infiltration into and around the wound, promptly after exposure.
In Sri Lanka anti rabies pre and post exposure prophylaxis is offered free of charge to people who are at risk of rabies, from most government hospitals throughout the country except few very small hospitals. Rabies PET is done according to a DGHS circular which has been based on available WHO recommendations and country experiences, to make the treatment uniform in all hospitals in the country. By adhering to this protocol patients following animal exposures will receive correct and the recommended treatment. In addition, by avoiding unnecessary vaccinations, wastage of expensive biologicals with limited availability can be prevented. Periodic revisions to this circular has been carried out, with the introduction of tissue culture vaccines in the entire country, implementation of intra dermal (ID) ARV schedules and changes in the ID protocols, all of which has been done according to WHO guidelines. The present PET protocol was issued in March 2016 - DGHS/Circular2016-127(MRI-ARPET). According to this protocol, it was recommended to do a sensitivity test (ST) prior to administering equine rabies immunoglobulin (ERIG) for major exposures and the volume was calculated according to the patient’s body weight (20IU/Kg). After infiltrating all the wounds adequately, any remaining ERIG was injected IM on the thighs.

On 20th of April 2018, the WHO released its latest position paper on rabies (Weekly Epidemiological Record - WHO, 20 April 2018, No16,2018,93,201-220). This position paper replaces the 2010 WHO position on rabies vaccines. It presents new evidence in the field of rabies and the use of rabies vaccines, focusing on programmatic feasibility, simplification of vaccination schedules and improved cost-effectiveness. Among other recommendations regarding rabies PET, there were two major changes on the administration of ERIG in this new position paper.

• The present WHO guideline does not recommend skin testing (ST) before administration of Equine Rabies Immunoglobulin (ERIG), as such tests poorly predict severe adverse events and their results should not be the basis for non-administration of ERIG when indicated

• However the treating medical officers should be prepared to manage anaphylaxis, which although rare, could occur during the administration of ERIG

• Maximum dose of ERIG is 40IU/kg of body weight. There is no minimum dose

An amendment to the existing ARV PET protocol was issued including these recommendations under the Director General of Health Services on the 10th of July 2018 with the following recommendations.

Considering the WHO guidelines on Rabies PET (2018),
 ST should no longer be performed before administering ERIG
 RIG should be infiltrated as much as possible to the site of the wound/s only
A course of ARV should always follow the infiltration of RIG