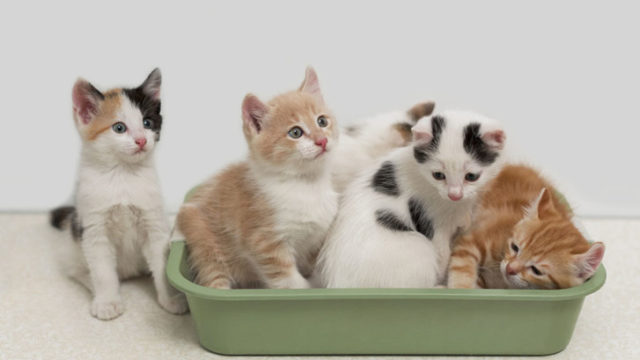 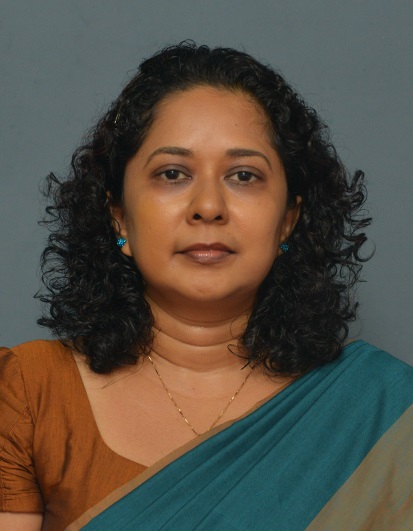 Toxoplasmosis is caused by an obligate intracellular protozoan parasite, Toxoplasma gondii.  It is a typical zoonotic infection with cats and other larger felids as primary hosts and a wide range of warm blooded animals as intermediate hosts. Humans are incidental dead end hosts and may acquire the infection through multiple routes; commonest being ingestion of dormant cyst stages in undercooked meat or ingestion of oocsyts via water and fresh food contaminated with cat faeces . The distribution of toxoplasmosis as assessed by seroprevalence varies widely with the geographical region while in Sri Lanka the reports are of intermediate range of about 30%.

Toxoplasmosis infection is asymptomatic in a majority of immunocompetent persons while some may develop a self-limiting flu-like illness. In contrast, some groups where the infection has severe sequelae include the immunocompromised patients and primary infections in pregnancy leading to congenital toxoplasmosis. Due to the non specificity of clinical signs and the wide differential diagnosis, laboratory testing plays an important role in timely diagnosis and subsequent management of toxoplasmosis.

The parasite exists in two forms in humans, the actively proliferating tachyzoites and the dormant bradyzoites in tissue cysts. In the presence of an effective immune response the acute phase lasts for about 7-10 days and elicits a strong type-I response, controlling the systemic infection and triggering the transformation of the parasite to the quiescent bradyzoite form. The role of antibodies in controlling the infection is secondary to the effects of the cell mediated response.

In contrast to many parasitic infections where the diagnosis is by demonstration of the presence of a parasite stage, the primary approach in toxoplasmosis is serodiagnosis. IgM is serologically detected 1 week after infection, and hence, is considered as an early and sensitive diagnostic marker for acute toxoplasmosis. IgG antibodies against T. gondii can be detected 1–2 weeks following infection. It peaks typically within 1–2 months and declines at various rates and usually persist for life. IgE and IgA antibodies are produced during the first weeks of infection and disappear early.

The serological assays to detect primarily IgM and/or IgG but also other isotypes such as IgA are available in several formats ranging from the more historical Sabin-Feldman dye test, hemagglutination, agglutination, immunoglobulin M immunosorbent agglutination (ISAGA), indirect fluorescent antibody test (IFAT), to the more recent semi automated and automated immunoassyas based on technologies such as chemiluminescent microparticle immunoassay (CMIA) and electrochemiluminescence immunoassays (ECLIAs)[1]. Immunochromatographic tests, with performance comparable to ELISA, for qualitative detection of IgM and IgG are also available. Based on the purpose of testing these can be categorized as those widely available and first line such as enzyme-linked immunosorbent assays (ELISA) or the second line/confirmatory tests largely confined to reference centers such as the dye test and immunoblots.

IgM titres in some primary infections have been shown to persist from months to years which confounds diagnosis of an acute infection [2]. The persistence of these IgM antibodies does not appear to have any clinical relevance, and these patients should be considered as chronically infected. Further, some laboratory methods used for detection of IgM have been shown to be more likely to give false positive results while it may also be due to other factors such as rheumatoid factor and antinuclear antibodies [3]. IgA antibodies may also similarly persist for prolonged periods in some instances while duration of IgE seropositivity is known to be briefer.

IgG avidity tests which aid the differentiation of recent from past exposure, add to this repertoire. The IgG avidity test measures the antibody binding force and is based on the principle that the avidity of T. gondii antigen to specific antibodies can vary with it being low during early stages of infection and increase with duration of infection. High toxoplasma IgG avidity indicates that an infection likely occurred at least four months earlier [4]. The test is available in different formats based on techniques such as ELISA and western blot.

Polymearse chain reaction (PCR) has been used as a complementary test to serodiagnosis and can be performed on any suitable body fluid or tissue. Parasitaemia may be present for up to about two weeks in a primary infection while it may be present intermittently in a reactivation. The assays are typically based on multicopy target genes to increase sensitivity and include B1 gene, the 529bp repeat element and the internal transcribed spacer (ITS-1) or 18S rDNA sequences [5]. Nested PCRs and Real Time PCRs have also been developed to increase sensitivity.

Presence of tachyzoites observed in Giemsa stain of any body fluid or “touch” preparation slides of any tissue can be interpreted as laboratory confirmation of toxoplasmosis. Immunological staining to demonstrate parasite antigens have been used to improve detection of parasites, especially in the presence of heavy inflammatory infiltrates. Multiple tissue cysts near an inflammatory necrotic lesion observed in histopathology sections stained with hematoxylin and eosin will be highly suggestive of an active infection.

Bioassay using laboratory animals is considered the gold standard for detection of T. gondii infection and the isolation is typically carried out by intra peritoneal inoculation of mice with suspected infected material such a body fluids or tissue while isolation in cell cultures is a well-accepted alternative.

Toxoplasmosis is usually diagnosed in the clinical setting by detecting antibodies to Toxoplasma gondii. The main diagnostic requirements remain establishing that infection has occurred and determining if the infection occurred recently or in the more distant past.

A diagnosis of toxoplasmosis may be queried in an immunocompetent person commonly when presenting with a febrile illness accompanied by lymphadenopathy (commonly cervical) with discrete, non-tender nodes while ocular disease is a less common presentation. Acute infection is supported by documented seroconversion of IgG and IgM antibodies or a greater than four-fold rise in IgG antibody titers.

Diagnosis in pregnancy and congenital toxoplasmosis

A primary or seroconverting illness in the mother has the risk of trans placental passage of Toxoplasma parasites to the foetus resulting in congenital toxoplasmosis. The extent of damage to the foetus will depend on the timing of the infection with the highest risk being in the first trimester. In contrast, the risk of transmission to the foetus is highest in the third trimester. The presence of T. gondii IgG at a low, stable level without IgM in the mother is in favour of a past infection while seroconversion or rising titres would be considered an indicator of an acute infection.  In situations in which the date of the T. gondii infection is difficult to establish, which would be important to decide further management of the pregnancy, IgG avidity testing becomes a useful complimentary test. However, this also has its limitations as low avidity IgG has been shown to persist in pregnancy for months [6]. Confirmation at this stage will ideally depend on testing of amniotic fluid by PCR.

Tests which can be performed at birth include demonstration of parasite in amniotic fluid, placental tissue etc and testing the newborn’s serum for anti-toxoplasma IgM, IgG and IgA (Fig 1). While IgM indicates an acute infection it is evident only in about 75% of congenital infections and detection of anti Toxoplasma IgA becomes a useful supportive test in this setting. It is noteworthy that a majority of babies with congenital toxoplasmosis are asymptomatic at birth or have disease that is not identified by routine neonatal examination. Since antibodies of maternal origin can contribute to the test result, follow up of IgG isotype at regular intervals with determination of titres is the primary approach . Testing maternal IgG will be of value to exclude the diagnosis in the event of a negative result while comparison of mother and infant serological profiles of IgG and IgM using immunoblotting would help to identify specific antibody synthesis by the neonate [7]. The persistence of Toxoplasma IgG beyond 12 months of age would confirm a diagnosis of congenital toxoplasmosis [8]. 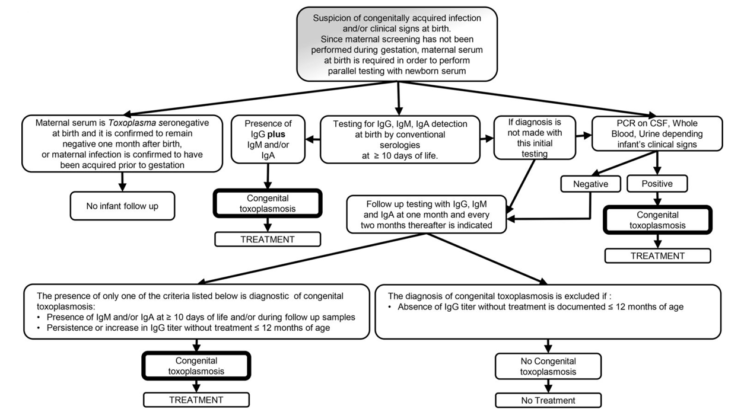 Fig. 1 Congenital toxoplasmosis diagnostic algorithm for testing and monitoring infants when infection has not been detected in antenatal period (Adapted from Pomares et al 2016 [8])

Often this is due to reactivation of a latent infection.  Similar to the immunocompetent, a seroconversion with presence of IgM and IgG antibody titers indicates an acquired infection. While the value of serology is limited in the case of a reactivation, the presence of IgG antibody titers with a high avidity index alone in the absence of IgM titers would suggest this possibility. The main disadvantage of serological diagnostic techniques in these situations is the absence of seroconversion in some active cases due to immunosuppression while low-to-high avidity switching has also known to be delayed in in immunocompromised patients [9]. Direct examination of Giemsa-stained tissue sections and smears or PCR on any body fluid based on the specific clinical features (e.g., cerebrospinal fluid,  bronchoalveolar lavage fluid) are the other common options. However, even though PCR based assays are considered very sensitive tests, instances of negative reports in the presence of clinical features have been reported in these patient groups.

In addition to identification of characteristic retinal lesions by an ophthalmological examination,

laboratory diagnosis is primarily by testing of aqueous humor, preferably for PCR and blood serology while the detection of a specific antibody response in ocular fluids is a useful complementary tool. The relatively low sensitivity of these tests in ocular toxoplasmosis has been attributed to low volume of the samples as well as late sampling and combining techniques has shown to improve the sensitivity of biological diagnosis [10].

The sensitivity and specificity of serological tests, which is the main stay of routine diagnosis  depends on several factors, the most important of which is the level of individual classes of antibodies produced during infection and the quality of the antigens used in the tests. Use of recombinant antigens including multi-epitope and chimeric antigens in these tests would improve standardization and performance as well as eliminating the biohazards of handling live parasite cultures [11]. Further, these tests are being improved to differentiate the clinical phase of the infection.

The use of platforms with multiplex capacities can address cost, with the additional benefit that they may be extended to testing for other infections. In addition, the feasibility of testing for antibodies in body compartments beyond serum, such as saliva, can address cost and patient convenience. The relevance of also investigating the cell mediated immune response with selected chemokines and leukocyte subsets has recently been demonstrated with the potential of being developed as novel diagnostic biomarkers.